It’s Top Ten Tuesday, hosted by the wonderful blog at The Broke and the Bookish! This week’s topic: Top Ten Characters Who I Would Totally Want To Be For Halloween

This is a totally awesome topic. There are so many characters I would LOVE to dress up as for Halloween but 1) I have no Halloween parties and 2) most likely the attendees wouldn’t even know who half of my choices are because they are not cool enough to be as big of readers are we are (high fives!)… So for the mean time, I will just get all these ideas in my head and pretend like I have the means to put these costumes together! 😀

As for my choices, I also sought out pictures that weren’t just Halloween-store, cheapie costumes. As popular as they are, I’m always a fan of the homemade costumes and I LOVE what people come up for cosplaying too! (And seriously. What’s up with the sexy Hermione costume…?)

Image Source: I’m really not sure because the link led to Amazon…? But the Pinterest caption just said SDCC 2013!

Image source: (I could only find the link from Pinterest to this photo) 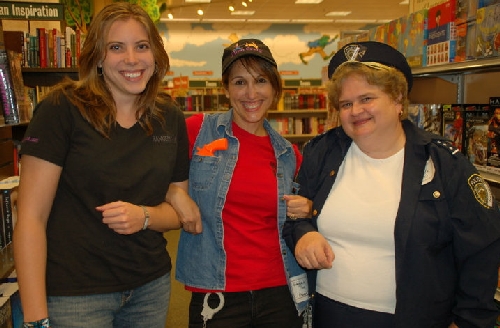 Well, as fun as these costumes would be, I am not dressing up this year! Someday all of us book nerds will get together and dress up as our favorite characters and what a fun party that will be!
So what do you think? Which costume is your favorite? Which character would YOU dress up as for Halloween?

18 thoughts on “Top Ten Tuesday – October 28, 2014: Top Ten Characters Who I Would Totally Want To Be For Halloween”