Where do you go when nowhere is safe?
Sixteen years after a deadly virus wiped out most of Earth's population, the world is a perilous place. Eighteen-year-old Eve has never been beyond the heavily guarded perimeter of her school, where she and two hundred other orphaned girls have been promised a future as the teachers and artists of the New America. But the night before graduation, Eve learns the shocking truth about her school's real purpose and the horrifying fate that awaits her.
Fleeing the only home she's ever known, Eve sets off on a long, treacherous journey, searching for a place she can survive. Along the way she encounters Arden, her former rival from school, and Caleb, a rough, rebellious boy living in the wild. Separated from men her whole life, Eve has been taught to fear them, but Caleb slowly wins her trust... and her heart. He promises to protect her, but when soldiers begin hunting them, Eve must choose between true love and her life.
In this epic new series, Anna Carey imagines a future that is both beautiful and terrifying.

I’ll admit it. I originally made it 80% through this audio book and THEN gave up, marking it DNF. That just didn’t sit well with me, though. I had come so far! I really didn’t want to give up… So I finished honestly for the sake of finishing the book. I wasn’t enjoying it but I made it that far…. Might as well!

Firstly. I did not like Eve. Even before the narrator of the audiobook bothered me more. I found Eve to be weak-minded, wishy-washy, and an overall victim. She made a few bold decisions but mostly out of necessity than bravery. She was very naïve, didn’t think for herself, and seemed to latch onto whatever people told her. How did she go from being raised her WHOLE LIFE to not trust men/that they’re evil and then she “falls in love” soooo easily, depending entirely on Caleb and barely flinching when they join forces. I felt like she always played the victim, even when she had the opportunity to stop and think.

Secondly. The narrator was actually very good at telling the story, using different voices, putting in emotion, etc. But it felt like everything that she was doing with Eve’s character only enhanced the things I was hating about her. I just couldn’t take the whines, the exasperation, the shrillness… I was done.

Lastly. I wasn’t a fan of this dystopian world. I guess it was supposed to be 2030-something? Which I either missed or just plain didn’t know, but I felt SO pulled out of the story will all of the present-day (for us) or even past references (“I Love Rock and Roll”, the movie Ghost, several classic literature references). I felt like the world ended in the 80s, not the future. Those things just really pulled me out of the story and sort of… cheesed it up a bit for my personal tastes. I guess it depends on how those things of the past connect to the dystopian’s present. In this case, it just wasn’t working for me.

There were just too many things I didn’t care for about the book — Not HORRIBLE things to really turn me off, but if I don’t get along with the main character, it’s pretty much over from there. I wasn’t a fan of the way the story was done… Again, not horrible, but meh. It just wasn’t the book for me. Plus, I find as I read more and more dystopians, I get more and more picky. It’s just going to happen.

Eve: I didn’t like Eve. There, I said it. I felt like she was naïve to the point of annoyance (on my part), whiney, weak-minded, and easily swayed. I got frustrated how easily she changed her mind based on what people told her and she was just a weak character for me. Not my cup of tea.
Caleb: Zero swoons whatsoever. I really wanted a lot more character development from him. He just seemed like a boy who was in the right place and the right time so that’s where the romance started. Eh.
Arden: I actually liked Arden! She had some fight and she was a fiery personality! Maybe the story should have been about her…

I know some people have enjoyed this series, but personally, I wouldn’t recommend it. I felt like there are much better dystopians out there and I just was NOT a fan of the main character so that was really hard for me. 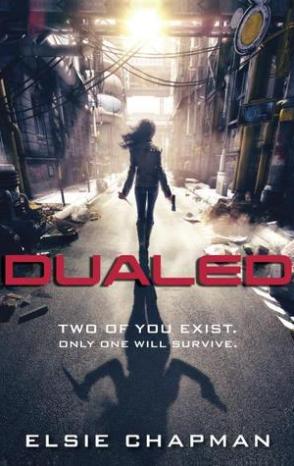