2014 was the year of me cutting back on a LOT of things, one of those being reading challenges. Now that my wedding is over and I’m getting back into the swing of things, I’m picking up a couple challenges I know I’ll be able to handle!

First is a shameless plug for my own 2015 challenge which is actually NOT a reading challenge — it’s the Book Blogger Organization Challenge. I want to work on cleaning up my blog this year, getting more organized in my blogging life, and doing some more blog maintenance. It’s totally casual and low-key despite the detailed schedule. You can participate as little or as much as you want to! The details are there for the people who need more of a “schedule” to stay organized but if you’re overwhelmed by how much you need or want to do, just hop in when you can! The challenge is designed to be helpful and not to overwhelm!

I skipped 2014, but this year I’m once again participating in the Debut Author Challenge, hosted by Jana from That Artsy Reader Girl. The goal is to read 2015 debuts and at least one a month. Jana has the full details on her blog (linked above) so I won’t get into all of the rules & regulations but I’m definitely going to participate in this challenge! I decided I’m not going to go crazy and just aim to read at least one debut a month.

Other months to come! 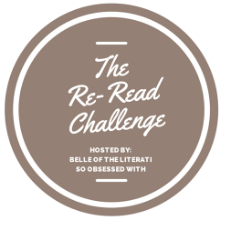 The last challenge I’m joining this year is The Re-Read Challenge hosted by Hannah of So Obsessed With and Kelly of Belle of the Literati. I re-read a LOT of books in 2014 and I’m so excited to re-read more in 2015! I already have big plans so this challenge should be no sweat! Here are a few books I want to re-read this year (or possibilities at least):

I also want to do Flights of Fantasy hosted by Alexa Loves Books and Hello Chelly! I’m a soooomewhat new fantasy reader (as in, I didn’t REALLY start getting into it until last year) and I’ve already dubbed 2015 “the year of fantasy” and have a few reads planned. This is the perfect, effortless challenge for me (I hope!) so I’m really excited to participate! Here are a few fantasy reads I want to finish this year:

And oh oh oh so many more!

I decided to add on ONE more challenge. I was trying not to do too many but this is another one I KNOW I will be able to not only meet goals but surpass them! I’m joining The Daily Prophecy’s Fairy Tale Retelling Reading Challenge! I usually read a bunch of fairy tale retellings and I already have some planned for this year so I thought I should officially join the challenge!
We can also read other retellings besides fairy tales, but fairy tales will be my most common ones!

Well, those are it! Good goals but nothing too wild. I want to be able to easily participate and not have to go crazy trying to keep up. I think it will be a lot of fun!